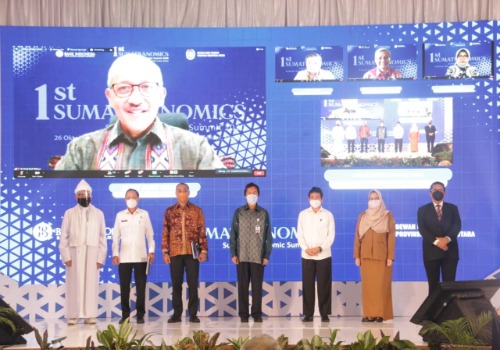 The Provisional Mayor of Medan, Mr. Ir. Arief Sudarto Trinugroho as well as the Assistant for Economic Development and Welfare of North Sumatra Provincial Secretariat  representing the Governor of North Sumatra, Edy Rahmayadi appreciated the Sumatranomics 2020 which was held by Bank Indonesia of North Sumatra Representative Office at the Hotel Santika Dyandra, Monday (26/10/2020).

It's a hope that this activity can contribute thoughts by experts, academics, practitioners, government elements, and all stakeholders in contributing to the handling of problems and to formulate economic strategies and policies in Sumatra region in general and North Sumatra particularly.

The Provisional Mayor of Medan in his remarks said that North Sumatra Province including Medan City is currently still facing the Covid-19 pandemic condition which has had a domino effect on various aspects of life. The increasing number of citizens which was growing and made more problems in health sector. Meanwhile, in the economic aspect, global economic conditions have decreased sharply, weakened public consumption and the decline that has occurred in almost all sectors, so that overall economic growth has contracted.

Even Mr. Arief said that, North Sumatra Province was recorded in the second quarter of 2020, its economic growth condition contracted to -2.37%. However, the Provisional Mayor of Medan explained this figure was still better than the national gained which contracted by -5.32%. "The economic growth of North Sumatra was still supported by the information and communication sector which grew by 5.42%, the government administration sector, defense and social security by 3.09%, and the agricultural, forestry and fisheries sectors which were recorded at 1.42%."

Meanwhile, the sectors that experienced as the highest contraction were the transportation and warehousing sector at -20.32%, the accommodation and food supply sector at -14.77%, and company services at -7.69%. In September 2020, North Sumatra Province also experienced deflation at 0.01%.

This 2019 was certainly indicated by the Corona Virus (Covid-19) pandemic and has had an impact on weakening public demand. This situation was caused by the pandemic, said the Provisional Mayor of Medan again. The North Sumatra Provincial Government forecasts that North Sumatra's economic growth in 2020 will only grow by 1.2 - 1.6% in a very severe scenario, and in 2021 it is forecasted at 4.70 - 5.70%. "Meanwhile, inflation is expected to be at 2.00 ± 1% (two plus minus one percent) in 2020, and 2.85 ± 1 (two point eight five plus minus one percent) in 2021," he explained.

To deal with this, the Provisional Mayor of Medan revealed that the North Sumatra Provincial Government has formulated six strategies that are expected to strengthen handling of Covid-19 in this beloved Province, namely the massive 3T (Testing, Tracing, Treatment), the precondition of a new normal order, to recover the demand through the provision of a social safety net.

Meanwhile, the Head Bank Indonesia of North Sumatra Representative Office, Mr. Wiwiek Sisto Widayat, in his speech said that the global economy is currently facing the conditions of the Covid-19 pandemic. This condition disrupted global demand, which led to a contraction due to the lockdown policy. For North Sumatra itself, economic growth is predicted to slow down due to decreased purchasing power.

"In 2020, all districts/cities in North Sumatra will also experience negatively of economic growth, the main sectors that usually encourage economic growth do not experience an increase. Even so, the economy started to improve in the third quarter and it is hoped that it will continue to grow in the fourth quarter. This is inseparable from to the national recovery program through social assistance channeled by the Central Government and refocusing the Regional Government budgets for less important activities, "said Mr. Wiwiek.

For this reason, he continued, with the holding of the Sumatranomics Conference in 2020 which is an event that is expected to produce research and innovation as input capital in the progress of the economic sector during the current crisis. "I hope this activity can be input in supporting the acceleration of the regional economy," Mr. Wiwiek concluded.